Pokemon Unite has just been released and has been well received by fans for its MOBA gameplay similar to League of Legends or Lien Quan Mobile. This article summarizes all the information and instructions on how to play Pokemon Unite for newbies.

Guide on how to play Pokemon Unite

Almost today, gamers prioritize MOBA games. This online confrontation increases the difficulty and skill of the game. Depending on your personal skills and the type of Pokemon, you can choose one of the following three paths: 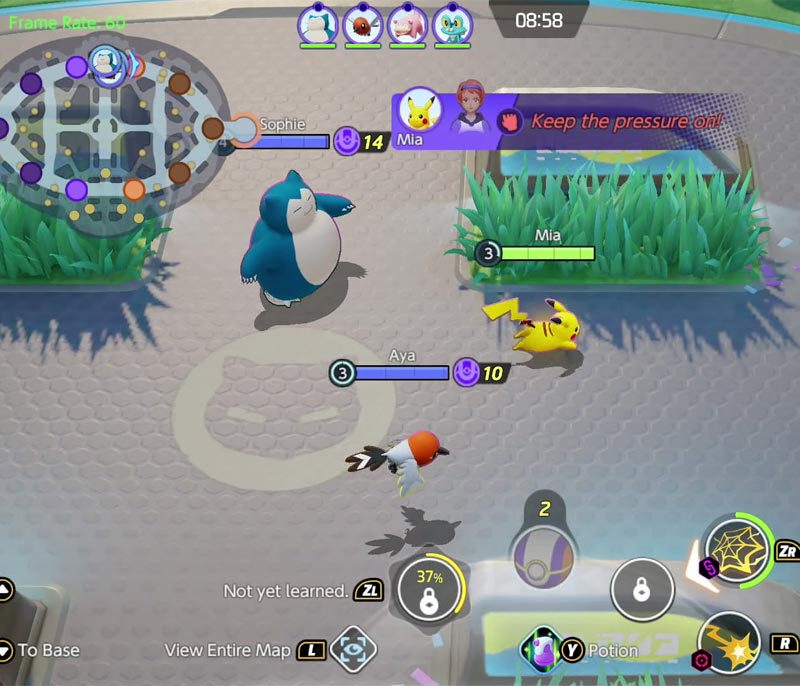 Innnewyorkcity VN lists how to choose the first lane in the article on how to play Pokemon Unite, because for new players, choosing the right lane is a stepping stone to later developing your skills. There are bushes all over the map, you can hide to ambush opponents. Each team has to protect 5 basketball towers, the top and bottom halves will be destroyed by the team that collects 100 points first. However, collecting this point will not help to destroy the main tower. Besides defeating opponents and earning points, players also need to collect balls, earn buffs from bosses or wild Pokemon.

The next part of the guide on how to play Pokemon Unite shared by Innnewyorkcity VN is Pokemon Groups. This will help you understand the champion’s qualities so you can make the right choice for your individual skills and teamwork. 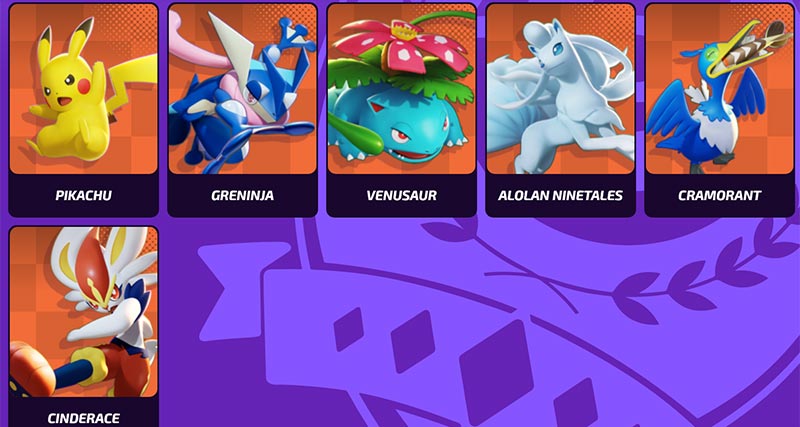 The Attack group includes a number of Pokemon such as Pikachu, Greninja, Venusaur, Alolan Ninetales, Cramorant, Cinderace. This group has low resistance but high damage and range. This is the main position of the team like the AD position.

Team Speed ​​consists of Zeraora, Talonflame, Absol, and Gengar. They have abilities similar to assassins in League of Legends. Team Speed ​​possesses the ability to move flexibly, attack quickly, and defend. This is the group that keeps the early game pace with the ability to get high kills.

The comprehensive team includes Charizard, Lucario, Machamp, Garchomp. This group has increasing strength over time, excellent resilience in battle, is the “Honorable Warrior” of the team.

Guardians are usually Snorlax, Crustle, and Slowbro. They act as a damage barrier tanker to help the attack group maximize their power.

The support team has Pokemon like Mr.Mime, Wigglytuff, Eldegoss. This group has good healing abilities for themselves and teammates. They also possess very good control or power buffs. The group of wild Pokémon includes: Drednaw (killing it gives the whole team experience and shield), Rotom (gives 20 points when it gets close to the enemy target), Zapdos (appears at the end of the game to help when destroying the area to help) . main house protection).

How to read pokemon stats 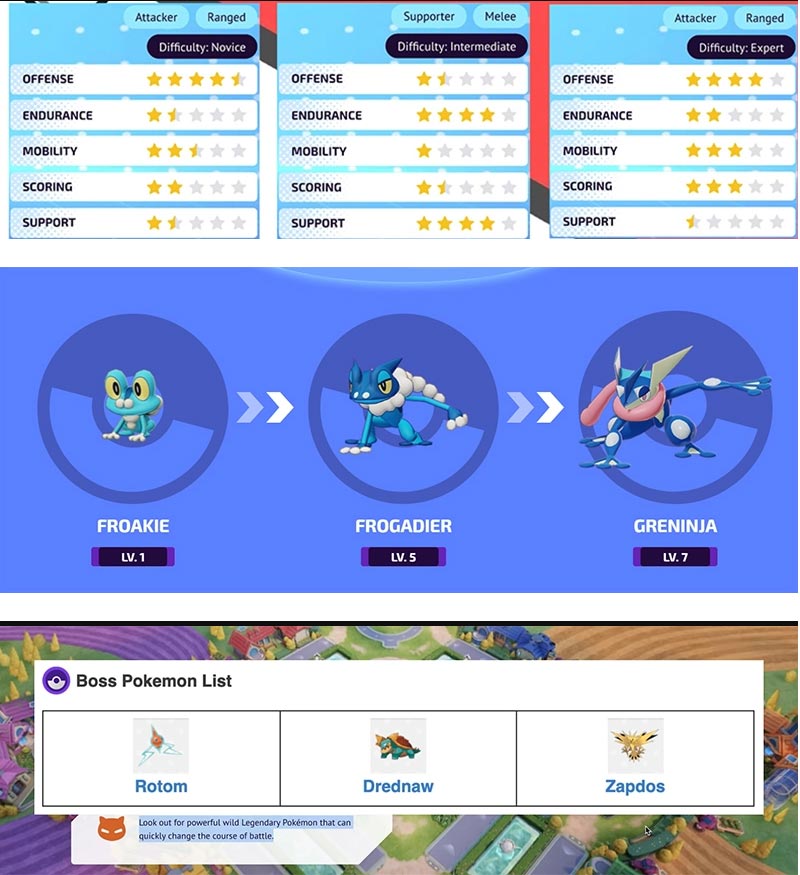 Each Pokemon has its own datasheet that includes range, role, and difficulty on a 5-point scale. The best Pokemon Unite guide is a guide for reading game stats. In terms of range, there will be 2 tiers: Ranged like Pikachu and Melee like Lucario. The level of difficulty is divided into 3 levels: Novice (easiest), Intermediate (medium) and Expert (difficult). In each different level with different Pokemon, there will be a different form of evolution. One thing in common is that all level 9 Pokemon have an ult. During the battle, 2 items and a special boss will appear to help you, including: 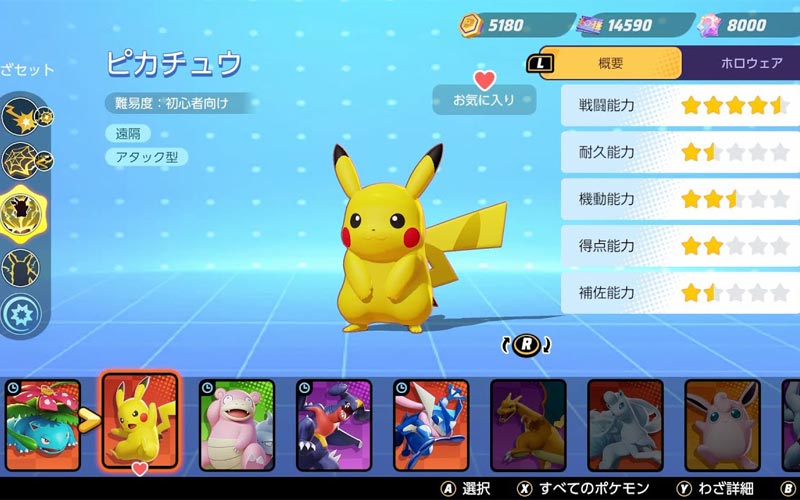 Besides the basic Pokemon Unite tutorials, you also need to be familiar with the mechanics of countering champions. This is a tool-less game hacking mechanic that not everyone can do. This way you stay ahead of your opponents and quickly take the lane. Pikachu is a long-range attacking general with high damage and hard control, so it’s loved by many players. For every 10 games, there are 9 games with Pikachu, the rest because Pikachu is banned. Pikachu’s win index is also quite high, so it’s often chosen. Also, since there are quite a few champions currently, there will be many new Pokémon released in the next few updates. 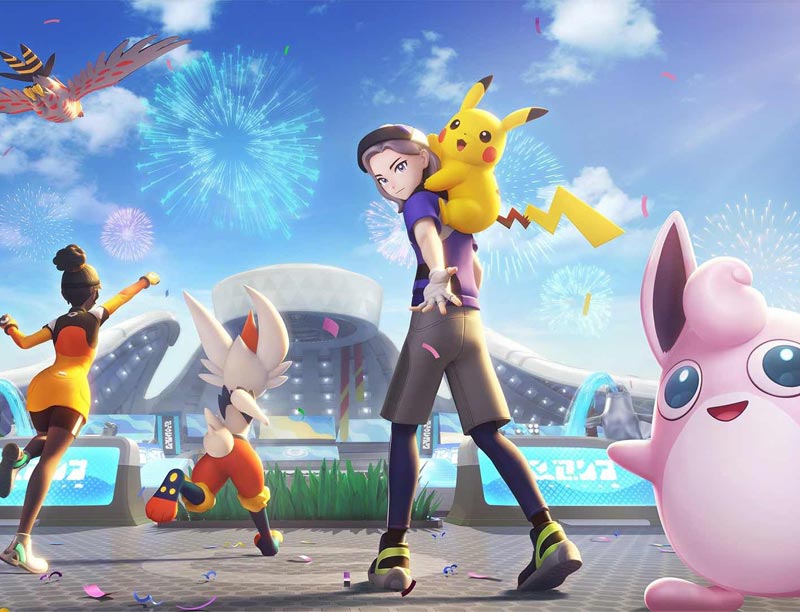 If you meet Pikachu on the opposing team and don’t want to lose, follow these steps. First, you can choose a Pokemon that attacks late in the game. Because at the end of the game, Pikachu will be weaker, more health. Second, you can roam the support zone with your attacker to gain armor and control Pikachu’s resistance. In addition, you can also allocate resources for all-round Pokémon and centralize resource control.

Summary of instructions on how to play Pokemon Unite

Pokemon Unite is developed by Timi Studio Team and published by The Pokémon Company for Android and iOS. The Pokémon Unite guide was announced at the launch of Pokémon Presents on June 24th, 2020.
Hopefully through this article you have understood the basic gameplay of Pokemon Unite game. Remember to visit Innnewyorkcity VN regularly to learn more interesting games!